by - bytech in - Attractions, Jerusalem Deals 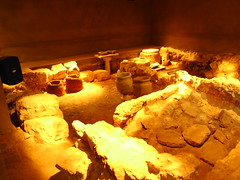 The Burnt House is an excavated house situated six meters below current street level, The house is dated to the Second Temple period located in the Jewish Quarter of the Old City of Jerusalem and is believed to have been set on fire during the Roman destruction of Jerusalem in 70 CE.

The Burnt House is a magnificent structure, located some six meters underground, found during excavations of the “Upper City.” It is named so because it serves as a unique testimony to the destruction of Jerusalem during the first century, and the fire set by the Romans. Archaeologists at the site discovered stone tablets, grindstones and ovens, large pitchers, bowls and measuring cups, and researchers believe that there was a perfume workshop at the site. Apparently the house was burned during the Roman conquest of the “Upper City” , in the large fire that also engulfed the Temple. The structure is also called Kathros House because of an inscription found at the site. The Kathros family was one of four priestly families that abused their positions.